INDIANAPOLIS – Today, the Federal Transit Administration released its Small Starts funding recommendations for the 2017 federal fiscal year including a $75 million award for the construction of IndyGo’s Red Line Bus Rapid Transit (BRT) project. The grant adds to more than $40 million in successful competitive federal funding opportunities for IndyGo since 2012.

The Red Line was identified as a 35-mile, 3-county rapid transit line through the regional Indy Connect planning process, which was launched in 2009 as a collaborative planning initiative to improve transit in Central Indiana by the Metropolitan Planning Organization (MPO), the Central Indiana Regional Transportation Authority (CIRTA), and IndyGo. The line will be the first Central Indiana rapid transit line and, when fully built, will run from Westfield through Carmel, into downtown Indianapolis, extending to Greenwood.

The route has seen strong regional support, and ultimately will come within half a mile of 100,000 residents, connecting workers to the state’s two largest employment clusters (downtown Indianapolis and U.S. Highway 31 in Carmel). The line will also make healthcare and education more accessible with reliable, frequent and quick travel to the state’s largest hospital and 4 major higher education institutions.

“IndyGo is thrilled to move forward with the Red Line. This funding decision is a testament to the quality and importance of the Red Line project,” stated IndyGo President and CEO, Mike Terry.

The Small Starts grant award will position IndyGo to begin implementing the Indy Connect plan within Marion County. Phase 1 construction of the Red Line will begin spring 2017.  Approximately 18 months after breaking ground, the first segment of the Red Line will run for 13 miles from Broad Ripple to the University of Indianapolis via Downtown Indianapolis and will be the nation’s first battery-powered all electric BRT system.

A referendum this fall could fund other pieces of the Indy Connect plan:  Blue and Purple rapid transit lines, as well as significant enhancements to local bus service including more convenient routes across the city with shorter waits, earlier in the morning, later at night, and an improved grid pattern for faster travel times and more efficient transfers. Phases 2 and 3 of the Red Line will be dependent upon local referenda to be passed in each of the three counties. IndyGo is hosting public meetings for feedback on the Marion County portion of the transit plan throughout February.

In 2015, IndyGo focused on design and public input of Phase 1 of the Red Line, organizing and actively participating in more than 60 outreach meetings, including neighborhood association presentations, business forums, and public open houses. IndyGo has already secured much of the $18 million local match through the Downtown Tax Increment Financing (TIF) District and the Indianapolis Department of Public Works.

Next steps include the continuation of design and public outreach activities through the end of 2016. This spring, IndyGo will release a design competition to determine the design of the BRT stations and giving the public an opportunity to weigh in on proposed designs. Construction should begin in phases in the spring of 2017 with final completion and opening for service in 2019. 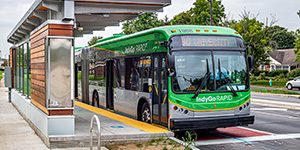 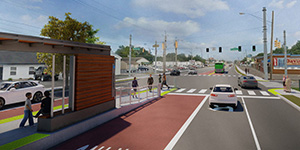 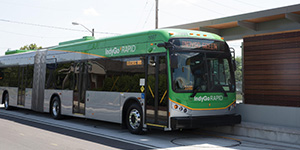